A guide to the poo man stance in surfing

Whether you believe it or not you have performed the poo man stance while surfing. Poo man happens when a surfer squats with equally bent legs rather than assuming the more aesthetically pleasing and performance-enhancing stance, where the surfer’s back knee tilts inward and their front foot aims slightly towards the top of the board. This so-called “normal” surf stance looks agile and poised for action. It’s what you would expect from a martial artist or a graceful yoga practitioner. You have a front foot on which to pivot and a back foot to drive your action. While you’re riding the wave there’s a twisting movement whereby pressure shifts from back foot to front as you engage your toe-side rail and then reengage the heel-side rail, with both hands pointing towards where you want to go.

This is perhaps surfing‘s least pretty position. Try it out now for yourself. Stand up and spread your legs two hip-widths apart. Hold your arms straight out in front of you. Now bend your knees to the point where it becomes rather uncomfortable, like you’re performing a wall squat after being punched in the nuts.

Another way to conceptualize this is: imagine you’re squatting over a long drop toilet. Now lean slightly forward. This is poo man in action.

Sometimes it happens completely by accident. You come out of a barrel, you’ve been clipped by the cascading lip, and somehow you crouch down a little bit too low. Instead of emerging like the hero who slayed a dragon, you emerge like the hero who just dropped kids off in the world’s largest pool.

Experienced surfers usually manage to avoid the poo man stance. It’s beginners and intermediates who get caught short. Who has ever seen a surfer who is about two years into their surfing journey…They can paddle and drop into an unbroken wave. They can bottom turn. They can maybe even do a floater (pun intended). But then it happens. They get into their groove, mind surfing like Slater in Black & White, but reality unleashes a massive twerk towards the beach. And when they kick off the back of that wave, now standing up a little more straight, they’re glowing like they just won the Pipeline Masters.

Let’s explore some common, weird and wonderful variations of the poo man stance.

This one is a perennial favourite. The surfer is on a too-short shortboard and, in their reality at least, they’re owning the lineup. They’ve paid their dues (for about two years) and they’ve got the look. Just like the Red Hot Chili peppers in the original Point Break, they’re locals now and they’re feeling it. They catch that wave and pump the front foot like a race car driver. Hands swing wildly. Their face is a picture of pain. This is aggro poo man, their shortcoming in terms of ability more than made up for by that pooping caveman posture. Every session to them is a heat and they’re in it to win it. Often long-haired and bearded they flail violently across waves, pumping along sections that are begging for a turn.

As someone who identifies as a male, happens to have equipment to match, and finds the opposite sex rather attractive, I don’t have hard feelings towards the lady poo man. Especially when it is being performed by an attractive woman in a bikini. In fact, attractive young ladies wearing a bikini in the surf are welcome at my beach break any day. I’d rather watch them catch waves then pretty much anyone else. May bikinis continue to shrink and poo man’s live forever on attractive surfer women. We now rename this particular variation the lady poo man. Much nicer, right?

For many of us, longboarding looks about as much fun as using a public toilet in Bali. Those public toilets incidentally are of the long drop kind. It is this position I notice on many longboarders because in order to maneuver a log, the rider needs to push hard enough to lay one. The less graceful practitioners often assume very special variant of poo man with toes on rail but backside fail. It doesn’t look quite as bad as the short board version but it’s still not great.

This is the poo man for the surfer on amphetimines – the hyperactive, energizer bunny, who is suffering from mild constipation. They’ve been in that bathroom for 45 minutes and the feet are tapping with intensity. Yet no matter how how hard they push it’s not coming out. Prune juice is necessary.

This is the poo man performed by a newbie. They catch an already broken wave and ride it straight to shore, whitewater tumbling at their heels. They crouch down into a squat with each arm extended sideways and a smile as wide as their wingspan. Even the most world weary surfer can appreciate the happy poo man. In fact we were all there once and it’s likely we will be there again. Which leads me to the old poo man.

The only certainties in life are death and taxes. Unless you’re a large multinational corporation for whom taxes don’t apply. But we’re all going to get old and as we age we will lose our flexibility. Stiff, aching joints mean that we will pop up more slowly and our stance will suffer. There is a time of frustration in one’s 50s and 60s where the muscles start clamping up and the joints begin to grind. You know you’re on the way if when you sit down in a chair you release a long sigh. Or when you stand up it takes you a while to fully straighten out your body. The old poo man is golden as far as I’m concerned. I recommend giving them their fair share of waves and a little encouragement. Set an example for the young grams and they’ll do the same for you one day.

This is a surfer who has balls so big that they struggle to stand up straight even at the best of times. Put them in giant waves and that poo man stance is a necessity. They paddle out on their 8 foot elephant guns, with a faraway look in their eyes. They paddle for that looming beast and stand up-or should we say stand low, knees perfectly spaced, feet pointing at the toe side rail, butt hanging off the backside of the board. And they ride that thing better than most of us, simply because they dare to.

Like the big wave poo man, the tow-in poo man is willing to put body on the line in search of glory. They lock themselves into a tow board and get whipped into giant or sometimes medium-sized waves. These can be some of the most annoying of the poo man variety because they assume they are hard-core but in practice what they’re doing is often unnecessary and annoying. Just because your buddy bought a JetSki doesn’t mean you’re the next Laird Hamilton. Especially when the wave is only 3 foot.

This may have happened to you. You takeoff super late and your feet don’t quite find your traction. You make the drop but find yourself in a compromising position. The experienced surfer can quickly adjust but most of us end up riding that wave, at least for a while, in the poo man. With a bit of bad luck, the local photographer will catch a few frames of you shaking that booty.

If you’re finding yourself in poo man more often than you’d like, practice on land. Watch surf videos and emulate what the professionals do. Bend that back knee and shift your weight elegantly from toe to heel. Do yoga, especially sun salutations. Relax. If you’re surfing with a grimace on your face, your style will suffer. Relax your shoulders, point to where you want to go rather than holding your arms out in front of you or to either side

Improve your hip flexibility and that will transform your surfing. Get somebody to video you surfing in a range of conditions. It’ll be like listening to your own voice but you might find you learn a thing or two. Get a surf coach, if needed, to iron out any kinks.

If you’re going to be a poo man for life well that’s OK. There actually are some benefits. People spend way less time in a low squat then they used to. If you wander around in a place like India or Indonesia you will discover many people squatting as they sip their morning tea or have a cigarette and a chat. There’s less use of chairs. Many physiotherapists will tell you that the lack of the squat is causing us some real issues. We have increased back pain and weak leg muscles.

The humble squat has many benefits. You should get good at it, perhaps even investing in a special toilet stand that puts you into a solid poo man position so you squat, rather than sit over the bowl. This in fact improves your pooping ability by creating a much better trajectory for your bowels to empty out.

But if you can, leave that stance in the toilet, rather than in the waves. 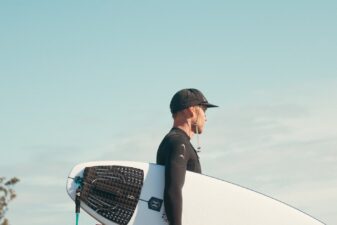 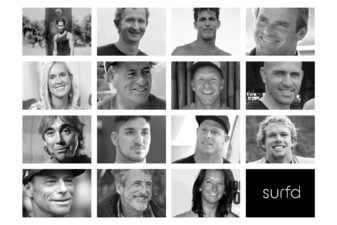 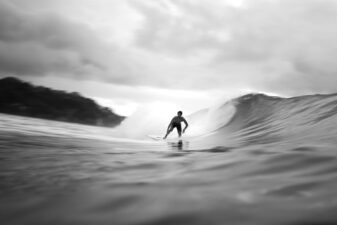